What’s the best way to celebrate Halloween in the office? How about making the pointy-haired boss character from Dilbert that lip syncs to sound using nothing more than a cereal box and a micro-controller? Imagine the laughters you will get when you bring it to a meeting, put it on the table and have it start lip syncing to the conversation in the room.  Your boss may also appreciate your sense of humor (or not)!

Here is a video of the pointy-haired boss lip syncing to sound played on my computer.

To make the pointy-haired boss, all you need is an hour of art and craft, and the following inexpensive items:

Instead of Ardunio UNO R3 as the micro-controller, you can also get by with cheaper models from Arduino or clones.


How to Prepare the Cereal Box?


You can probably figure it out from watching the video above but here are the steps:

Here are a few more mugshots to help you see the design from different angles. 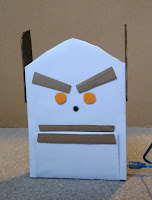 How to Mount the Microphone as Nose? 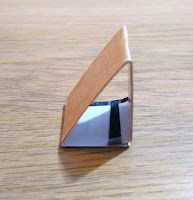 Similar to how you would use a shelf bracket, tape the sound sensor onto the bracket, then tape the bracket inside of the cereal box wall where the nose is at.  The sensor microphone should protrude a little bit out of the nose hole.

How to Connect the Mouth Flap to Servo? 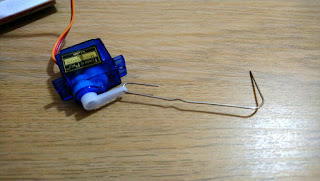 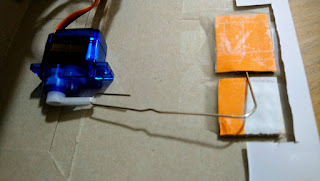 Tape the servo inside the cereal box on the bottom at a location that lifts up the mouth flap.  In other words, the mouth is closed at this servo placement.

For my cereal box, this location is near the center.

How to Wire up the Circuit?

As best practice, it's recommended to bridge a 220 Ohm resistor between the servo and Arduino instead of connecting the two directly.

How to Program the Arduino?


Of all the steps, this is the easiest.  Upload the following "sketch" using the Arduino IDE.


The analog input of the KY-037 sound sensor samples sound waves as unsigned integers.  The code looks for a rising wave signal as trigger.  When detected, it instructs the servo to rotate 20 degree and holds for 180 milliseconds before returning to 0 degree.  At 0 degree, the mouth is closed.  At 20 degree, the mouth is open.